It was a fast-paced few minutes in the Keeneland Sales pavilion on Tuesday for first-crop sire Practical Joke when the promising sire had two high priced short yearlings go through the ring within two hips of each other, topped by a $320,000 colt.

First up was the $210,000 Hip 548, a colt out of Bama Belle purchased by Brookstone Farm. Bred by Carhue Investments, Chelsea Bloodstock, and Paget Bloodstock, the colt was consigned by Blandford Bloodstock. Bama Belle is a half-sister to Grade I winner Funny Moon and Listed winner Throng in addition to stakes placed Home Crowd with two other sisters producing stakes horses.

"He was a very good physical, straight forward and a good walking horse. I have been very impressed with the Practical Jokes overall. He was an exceptional racehorse, I am a big fan of him as a sire and this is the horse we wanted today," said Brookstone Farm's Archie St George.

The colt comes from a strong family with his third dam the dam of Champion Vanlandingham, granddam of Grade I winner Distant Music, and half-sister to Temperence Hill.

Two hips later, Larry Best’s OXO Equine purchased a Practical Joke-sired colt to join two he bought in November when purchasing Hip 550 for $320,000 from Brookdale Sales as agent for breeder Vossfeld Bloodstock to become the session’s most expensive colt.

"He is just a super nice individual. We looked at him in the barn several times and he had a lot of class and carried himself very well. Larry Best has had a lot of success with Into Mischief and he likes Practical Joke a lot too. He already bought two who are back at the farm and doing well, we're delighted to get another one today," said Katie Taylor, who signed the ticket on behalf of Best.

The best son of Into Mischief with Grade I victories at two and three, Practical Joke’s first crop has been in demand with buyers with an average of $103,800 for his weanlings and his nine yearlings sold at the Keeneland January sale so far bringing an average of $117,667 and median of $90,000. 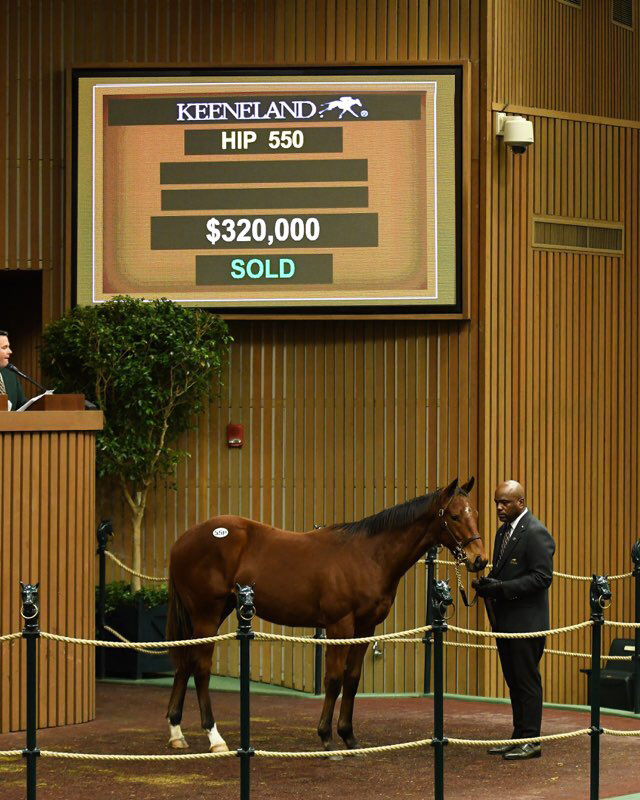 Let Her Inspire U Leads Coolmore Exacta in Empire Distaff