Born and raised at Coolmore, exciting colt Jacquinot (3c Rubick x Ponterro, by Pierro) seems a more than fitting contender to fill our Coolmore slot for the $15million Everest on October 15.

A brilliant winner of the Group I ATC Golden Rose (1400m), Jacquinot will remain in Sydney following his success on Saturday with his trainers Mick Price and Mick Kent Jr confirming the intention to freshen the colt for the shorter Everest assignment.

“Jacquinot is a horse that we have a close association with and after his explosive performance in the Golden Rose he was an obvious choice for our slot in The Everest. He is the 64th Group I winner to be raised and grazed at Coolmore and we think he has the right attributes to be competitive against the likes of Nature Strip in the worlds best race for sprinters. We look forward to sharing this experience with his owner/breeders who have been long-term supporters of Coolmore,” said Tom Magnier.

Jacquinot was bred by Lindsay Maxted and retained to race for a partnership of owners after he passed in when offered in the Coolmore draft at Magic Millions. 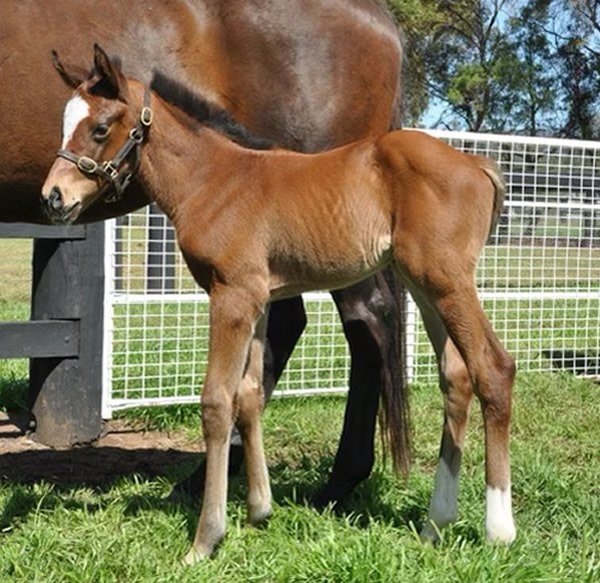 Conceived at Coolmore being by Rubick, who started his career at the Jerry’s Plains farm before switching to Swettenham Stud last spring, Jacquinot (pictured in September 2019 at Coolmore) is the first foal for his unraced dam Ponterro, a Pierro mare that was also bred by Maxsted and partners and foaled and raised at Coolmore.

His second dam Pontiana has been a stellar success at stud for Maxsted and was purchased from the Coolmore Inglis Easter Yearling draft in 2009 for $215,000. Bred by Fairway Thoroughbreds, the daughter of Redoute’s Choice was also foaled and raised at Coolmore.

Group II placed on the track, Pontiana has produced three stakes-winners to Coolmore sires - Group I winner Inference (So You Think), Dragon Leap (Pierro) and Illation (So You Think) – while her dam Liberty Rose is by the former mighty Coolmore shuttle sire Royal Academy.

Jacquinot quite literally has a pedigree dripping in Coolmore bloodlines with Rubick’s sire Encosta de Lago, one of the great champion Australian sires that is buried on the farm.

Jacquinot is the first Group I winner for his sire Rubick, who already has an Everest winner on his resume and that’s Yes Yes Yes, who stands his third season at Coolmore this spring at a fee of $38,500.

Saving the Best for Last