Justify In Demand At Keeneland November

Outstanding racehorse and promising stallion Justify proved to be popular with buyers on Wednesday at the Keeneland November Breeding Stock Sale when mares in foal to the stallion averaged $864,167, led by the sales topping Take Charge Brandi.

That mare wasn’t the only expensive mare purchased in-foal to Justify with multiple purple blooded mares going through the ring on Wednesday.

Four-year-old Galileo mare Conquest was a much-desired filly by buyers, bringing $1.25 million from London Thoroughbred Services as Agent for Erdenheim Farm Thoroughbreds as Hip 208. Carrying her first foal on a March 13 cover, the filly is out of Group I winner Lillie Langtry and a full sister to superstar Cartier Horse of the Year Minding and Grade III winner Kissed By Angels.

“It’s a beautiful family, Galileo mares as we all know are very, very good,” said James Wigan of London Thoroughbred Services. “It’s a wonderful cross and she’s in foal to a good stallion and from one of the strongest pedigrees in the book. We were sort of stretching ourselves but very happy to have her. I thought the market is very strong for the good animals.”

She was followed closely by fellow Galileo mare Hourglass, who was the last mare in foal to Justify thorough the ring on Wednesday. Another blue-blooded offering in foal to the stallion, Hourglass brought $1.1 million from prominent owner China Horse Club, who purchased five mares in-foal to Justify between the Fasig-Tipton November Sale and Keeneland’s Book 1.

Their Keeneland purchases also included a third Galileo mare in-foal to the stallion in Grade I winning A Z Warrior’s daughter C’Est Ca for $600,000. The mare is a full sister to two stakes winners.

Other big mares to sell during Keeneland’s Book 1 in foal to Justify included Sotto Voce for $850,000 to BBA Ireland, Ballet Shoes to Shimokobe Farm with Polo Green Stable as agent for $800,000, and the $700,000 Molly Corbin to a partnership involving Runnymede Farm, d’Gtreham, Peter Callahan, and Meridian International.

The only undefeated Triple Crown winner, Justify’s outstanding first American book has 59 Grade/Group 1 winners or producers in foal to the stallion with many of his mares hailing from the best pedigrees in the studbook. 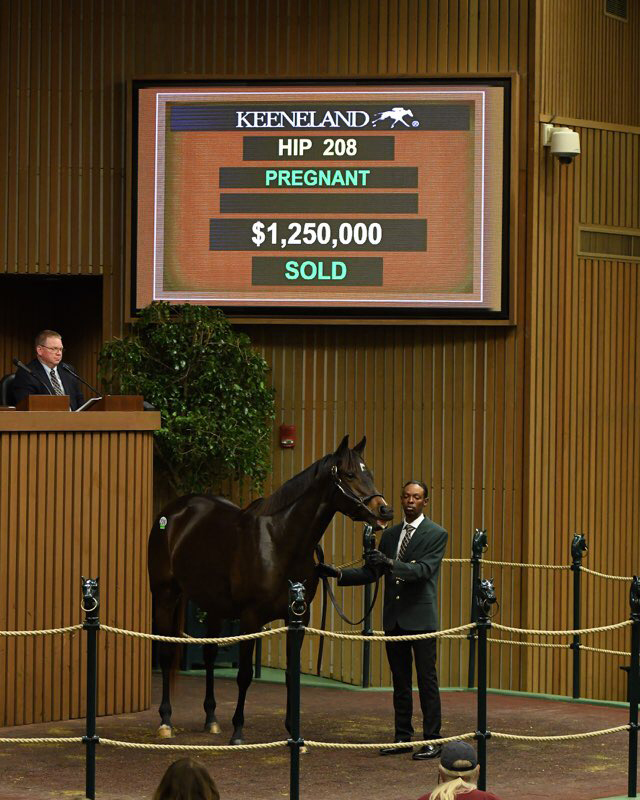