Undefeated Triple Crown winner Justify’s first yearling through the ring this season made a big splash on Monday in Japan when the colt out of Zipessa was the highest sold by a freshman sire at the JRHA Select Sale when bringing $1,801,802.

Sold to Kaneko Makoto Holdings from Shadai Farm, the colt tied for the sixth highest price overall of the Yearling Session.

He is the second foal for Grade I winner Zipessa, who finished in the top three in 11 of her 17 starts during an American racing career that saw her make 14 of her 17 starts in graded stakes company. The City Zip daughter was sold to Shadai Farm for $1.25 million at the 2018 Keeneland November Sale and visited Justify in 2019 before being sent to Japan. 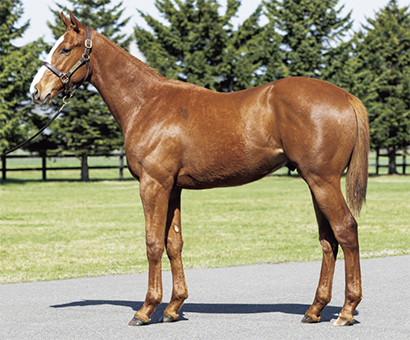 Zipessa is also a half-sister to stakes winner Majestic Code with Grade II winner Always Shopping and Grade III winner Dearest among other stakes winners on the page.

The colt is the first of two yearlings to sell for Justify this week with the stallion’s first North American offering going through the ring on Tuesday at the Fasig-Tipton July Sale.

Justify also has one foal to come at the JRHA Select Sale during Tuesday’s foal session with that colt out of champion Caledonia Road.

Undefeated Triple Crown winner Justify might not be in Australia this spring, but there is tremendous interest in…
Continue reading
18/09/2022

Gandolfini (2c Justify x Dorothy’s Aurora, by Simon Pure) was the second winner of the day for his…
Continue reading