Picking Up From Where Things Left Off

The 2016/17 racing season bore witness to an incredible run of success for graduates of Coolmore Australia.

In this 12 month period, a staggering 29 graduates of Coolmore’s farm at Jerrys Plains won a total of 45 Stakes races, including Group 1 winners Catchy (Fastnet Rock), Inference (So You Think), Awesome Rock (Fastnet Rock) and of course, the great Winx. On Saturday, the new season began with a bang at Randwick with graduates of the famed nursery registering a treble on the card.

Already a Group winner and Group 1 placed as a two-year-old, brilliant Fastnet Rock filly Formality(pictured) kick-started her three-year-old campaign with a record-breaking victory in the Gr.2 Silver Shadow Stakes. The Hayes/Dabernig trainee looks set for a big spring with her short-term goal being the Gr.1 Golden Rose Stakes at Rosehill on September 23rd.

The lightly raced and regally bred Fastnet Rock entire, Comin’ Through, a Group winner at Flemington last spring, looks set to realise his potential for owner/breeder Sir Owen Glenn following his dominant seasonal return with 60.5kgs on Saturday. The Chris Waller trained galloper will target races such as the Gr.1 Epsom Handicap this spring as he looks to enhance his already significant value at stud.

The performance of Winx at Randwick on Saturday had to be seen to be believed, as she extended her winning sequence to 18 in the Gr.2 Warwick Stakes. 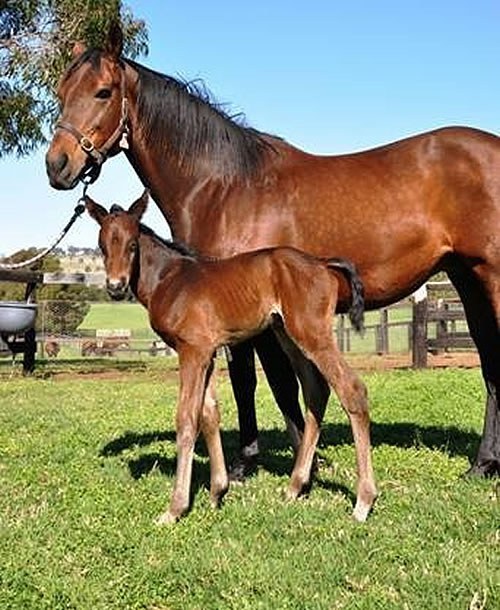 Pictured at Coolmore as a foal with her mother Vegas Showgirl, the highest-rated turf horse in the world further enhanced her credentials as one of the all-time greats by becoming the second highest earner in Australian turf history behind triple Melbourne Cup winning mare Makybe Diva. Her dam has been mooted as a potential mate for resident superstar graduate Pride Of Dubai in a mating that would breed the closest relative yet to the great mare.

The tally of stakes races won by Coolmore graduates since 1996 now stands at 468 with a host of high-class performers preparing for big spring targets. Aswell as the aforementioned, there are the likes of Gr.1 performers Tulip (Pierro), Oklahoma Girl (Fastnet Rock), Man From Uncle (Uncle Mo) and Omei Sword (High Chaparral), as well as Group winners Dawn Wall (Fastnet Rock) and Stampede (High Chaparral). Also on the list of promising graduates are Gr.2 placed filly Italia Bella (Fastnet Rock) and Gr.3 placed colts Dissolution and I Thought So (So You Think) along with the highly regarded Lone Eagle (Zoffany) amongst others.