The colt is the first foal out of his winning War Front dam, who boasts a top pedigree as a daughter of Listed winner and Group I Epsom Oaks second Wonder of Wonders – a granddaughter of the influential bluehen mare Urban Sea, who produced the legendary Galileo and Sea The Stars among others.

“He’s all quality and very correct, an excellent first foal for the mare. We are delighted with him,” said Ashford Manager Dermot Ryan of the new colt.

Talent runs deep in the colt's family with 30 stakes horses under Dramatically’s first three dams, including her two stakes placed full siblings. Dramatically’s second dam is Group III winner All Too Beautiful, who is quickly turning into an influential broodmare herself as the dam of Italian Champion Victory Song and granddam of stakes winners and Group I placed Sir Dragonet and Alluringly.

The first Triple Crown winner to retire undefeated, Justify bred the most Grade I winners of any North American sire during his first season at stud in 2019. 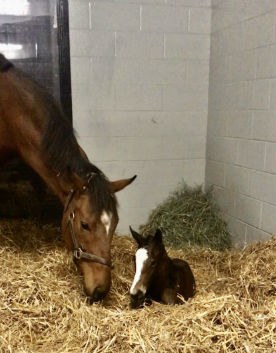