Purchased by Hawkes Racing from Kia Ora Stud’s draft, the $1 million colt is out of multiple group-placed Maastricht. Purchased for AUD$2.25 million (US$1.7 million), Maastricht had already proven to be a talented producer as the dam of Australia’s 2019-2020 Champion 3-Year-Old Filly Loving Gaby. That mare is a two-time Group I victress.

With Loving Gaby’s victories, Maastricht became a second-generation Group I producer with her own dam producing Group I Goodwood Handicap winner Velocitea. Fourth dam Ingres is also the granddam of Group I winner Orange County.

“He was a belter,” said Wayne Hawkes. “We trained Mum (Maastricht) and she was pretty good and placed in a couple of Group II races, so we knew she had the quality. This colt is the best Justify of the year.”

Loving Gaby’s half-brother wasn’t the only big money yearling by Justify during the two-day sale. TFI, Kia-Ora Stud and Dermot Farrington secured a colt out of Formality for AUD$950,000 (US$720,000) from the Coolmore Stud consignment on the first day.

The colt is the second out of Fastnet Rock’s multiple Group II winner and two-time Group I-placed Formality, who also has a juvenile filly by American Pharoah, and a weanling full brother to this colt to come. Formality is a second-generation stakes winner with her dam Jolie’s Shinju a Singapore Horse of the Year, who has produced six winners from six to race. 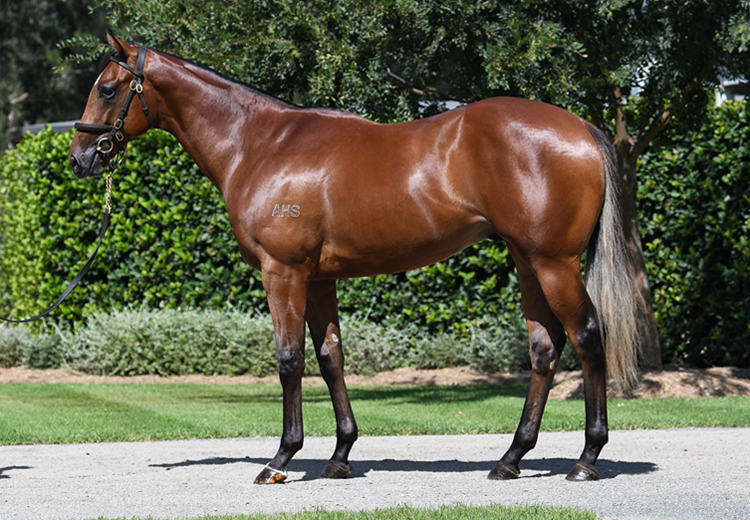 Formality is the only mare not to produce a stakes winner on the page with the colt’s third dam So Endearing the dam of Grade I winner Qualify with multiple daughters also producing U.S. stakes winners.

That $950,000 colt was joined by a $900,000 (US$681,000) filly on the first day of selling with Kia-Ora Stud also purchasing a daughter of Fastnet Rock’s Group III winner Ennis Hill. This is the second foal by the mare, who has a 2-year-old colt by American Pharoah in training with Chris Waller.

“She’s out of an outstanding family with stakes-winner after stakes-winner on the page,” said Shane Wright of Kia Ora Stud. “Every year it keeps expanding and now it has a stallion with Acrobat going to stud, so we’re very happy to be entering into it.”

Justify’s first Australian-bred 2-year-olds will hit the track this fall.