Breeding one of the best books ever seen, it was no surprise when early 2020 brought an outstanding parade of first foals for Triple Crown winner Justify. It is safe to say, however, that they have exceeded all expectations.

With 73 of the mares in Justify's first book being Grade/Group I winners or producers, including multiple champions, and 130 graded stakes winners or producers also visiting the stallion, the first two months of foaling season were an exciting time for the freshman sire.

Late January brought a filly by Justify out of Grade I winner Grace Hall born on Jan. 27. A great-granddaughter of dual Grade I winner Life at the Top, Grace Hall 13 of her 16 starts with all but one of those coming in stakes company. The mare’s six victories included the Spinaway as a 2-year-old, the same year she was second in the Grade I Breeders’ Cup Juvenile Fillies with the mare also third in the Grade I Kentucky Oaks the following year. Sold for $3.2 million at the Fasig-Tipton November sale as a 3-year-old to Alpha Delta Stables, who bred this foal, Grace Hall also has an Uncle Mo yearling filly.

A well-bred half-sister to a multiple Group I winner, Beatrix Potter produced a stunning chestnut filly for China Horse Club on Feb. 2. Beatrix Potter has already proved herself as one of the top producers in the world as the dam of Champion Harry Angel and last year’s 2-year-old Group II Mill Reef Stakes winner Pierre Lapin. From the extended family of Grade I winners Stephen Got Even and Artemis Agortera, the mare has three winners from five to race. 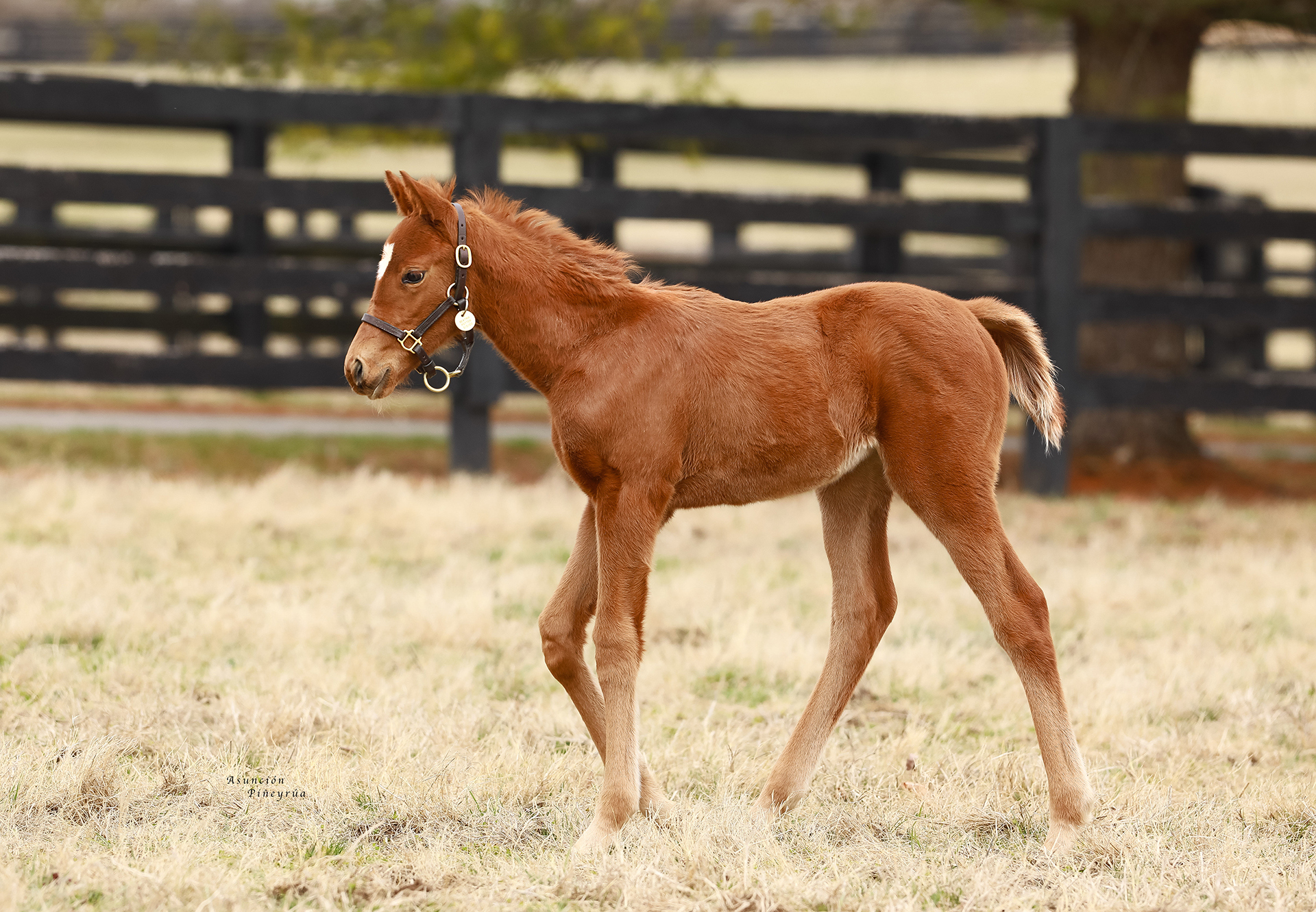 The march of proven producers foaling out outstanding Justify foals continued Feb. 6 when African Jade gave birth to a filly at Clearsky Farms. The dam of triple Grade I winner Lord Nelson, all the young mare’s foals to race have been winners. Not only a strong producer, African Jade is also backed by a top family as the daughter of Argentine Champion Miss Linda from the family of Grade I winner Carina Mia.

Grade I winner Curvy proved to be a top racemare and is quickly showing she’ll have the same success in her broodmare career. The E.P. Taylor winner foaled an outstanding Justify filly for Orpendale, Chelston, and Wynatt on Feb. 15. Curvy is a half-sister to classic winning Power and one of two Group II Ribblesdale winners for her dam Frappe. Frappe is a half-sister to classic winner and proven sire Footstepsinthesand.

Proven producer Storm Dixie kicked off a busy few days for Justify when she foaled a filly on Feb. 22 for Barronstown Stud. The dam of four-time Grade I winner Princess of Sylmar and Listed winning Biblical was followed by Grade I Breeders’ Cup Filly and Mare Sprint winning Bar Of Gold the next day.

The first foal out of Bar Of Gold, her Justify colt is the third generation of the family bred by Chester and Mary Broman. The Bromans have even more to look forward to in coming months with Bar Of Gold’s Grade III-winning dam Kancord Kid also in foal to Justify.

Justify helped Grade I winner Dream Dancing kick off her career on a high note on Feb. 24 when she produced a filly. The filly is a third generation John Oxley-bred with Oxley buying her third dam, Champion Beautiful Pleasure, as a 2-year-old. Dream Dancing's Grade III-placed half-sister is the dam of Group II winner Kimbear.

Emma’s Encore joined in the fun when she foaled a filly on Feb. 26 for Narola LLC. A Grade I winner from the family of Grade I Kentucky Derby winner Barbaro, the mare has a history of visiting Triple Crown winners. She was among the mares in American Pharoah’s second book, foaling a colt by the stallion in 2018 who went on to sell for $325,000 as a weanling.

Leap year brought an extra day this season and proven producer Nina Fever took full advantage by foaling a strong colt for breeder Michael Hui. The dam of Scat Daddy’s Grade I winner Nickname – a three-quarter sister to this colt – Nina Fever also produced Listed winner Hey Mike. A six-time winner herself and placed in three Listed stakes Nina Fever has proven to be a talented producer with two of her three foals to race winning or placing at blacktype level.

March started off with a bang with Bubbler foaling a Justify filly for Clearsky Farms and Hill ‘n’ Dale on the first.

A Listed winner, Bubbler made an immediate impression as a broodmare as the dam of Champion 3-Year-Old Arrogate. The mare immediately followed that up the following year with the Listed winning Osare. Her current 3-year-old won on debut last year for three winners from three to race out of the mare.

In a book that included just as many high-quality producers as racemares, Grade I producer and Listed winner Kosmo’s Buddy produced a filly on March 4 for Newtown Anner. The dam of Grade I winner and Breeders’ Cup Juvenile runner-up Knicks Go, the Outflanker mare is the third generation of her family to win or place in a stakes and is the dam of three winners from four to race.

March 5 proved to be one of the busiest days for mares in foal to Justify with three top-class mares foaling in the 24-hour span.

One of multiple champions who visited Justify in 2019, France’s Champion 2-Year-Old Filly Ballydoyle produced a filly on the fifth. The third foal for the regally bred mare, the filly shares granddam Butterfly Cove with Champion Misty For Me's Grade I winners Roly Poly and U S Navy Flag. 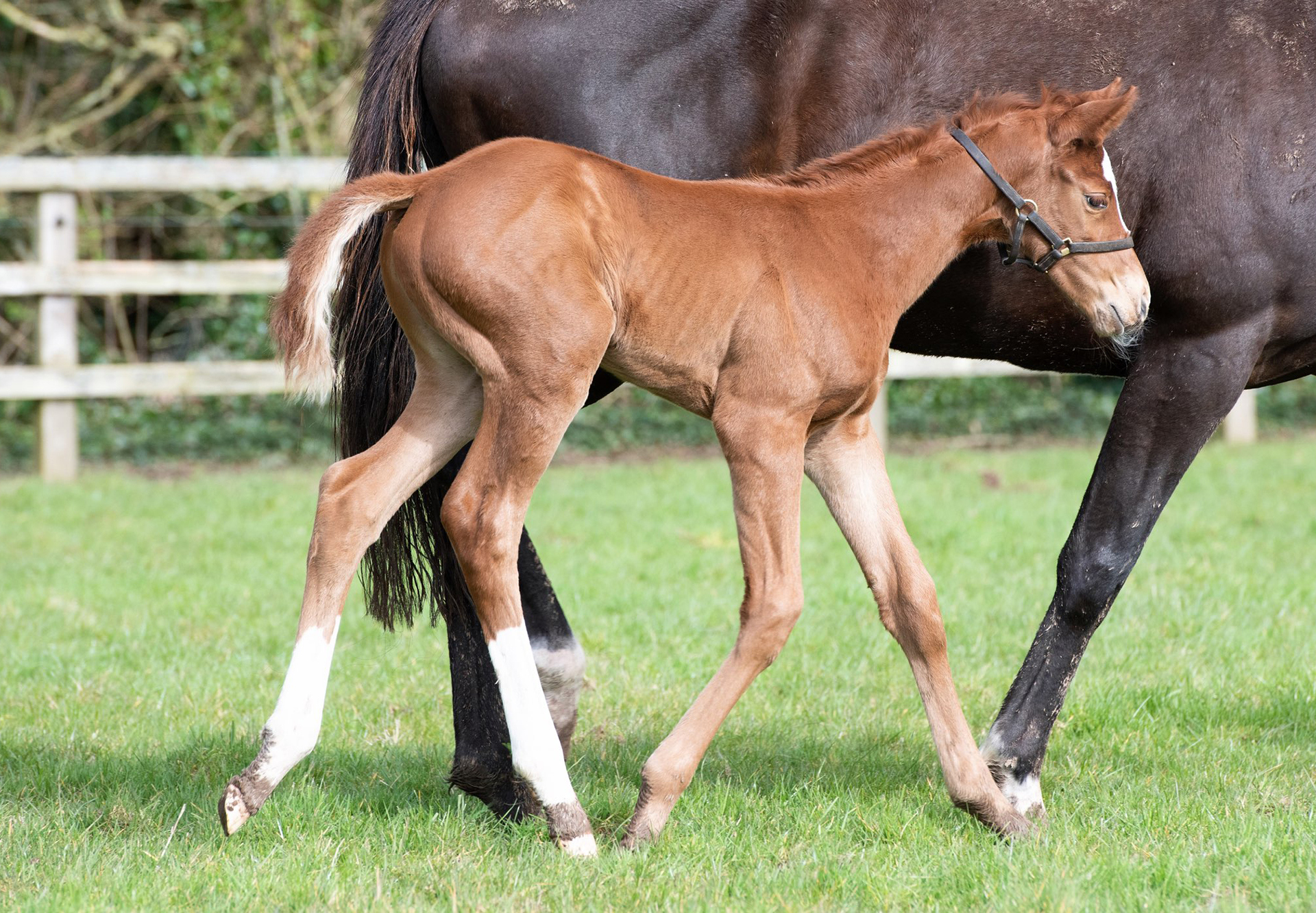 Another Justify filly was born just a few miles away when Bella Jolie produced a filly at Stonestreet Farm. Best known as the dam of Champion Runhappy, Bella Jolie has a 100 percent winner rate from her first four foals of racing age. The Stonestreet resident visited Uncle Mo in 2017, producing a colt the following season who sold last year for $500,000.

Another of the three to foal that day was Dazzling Song, who produced a colt for Ramona Bass. The dam of Grade I winner Magnum Moon, the mare has three winners from three to race. Her own prowess as a broodmare adds to a family that has proven to consistently produce top horses. Her stakes producing dam is a half-sister to Grade I winner and stakes producer Harmony Lodge and Grade II winner and sire Graeme Hall.

Rounding out Justify’s early March foals was a double-header on March 8 for Orpendale, Chelston, and Wynatt.

First up was the trio’s Group I winning mare Together Forever foaling a colt. Another regally bred mare to join Justify’s first book, she is one of three Group I winners out of Green Room with her full sister Forever Together winning the Group I Epsom Oaks.

Orpendale, Chelston, and Wynatt also teamed up with Merribelle Stables as the breeders of a Justify filly out of two-time Group I winner Immortal Verse. Immoral Verse is out of a Listed winning half-sister to Champion sire Last Tycoon.

The only Triple Crown winner to retire undefeated, Justify also took home Horse of the Year honors in 2018. The stallion’s first mares in foal were well received when averaging nearly $800,000 for 22 sold over the winter.

It’s been an interesting week for Triple Crown hero Justify, whose first Aussie bred two year-olds have been…
Continue reading