A$1.4 Million Colt for Justify at Magic Millions

The worldwide demand for yearlings by rising star sire Justify continued in Australia this week when a yearling out of Australian champion Sunlight sold for A$1.4 million at the Magic Millions Gold Coast Yearling Sale.

“He’s a very special colt, he’s beautifully balanced. He’s a lovely, neat sort of horse and I think he’s a real two-year-old type,” said Gai Waterhouse. “That’s why you come to Magic Millions. We come here to try and buy the horse that will be racing here next year and then hopefully go onto the Golden Slipper and then hopefully become a stallion in Australia. He’s a very handsome, very sexy horse.”

Waterhouse has been a big supporter of Justify in Australia with multiple 2-year-olds in the barn by the stallion. That includes the A$900,000 Just Glamourous, who is close to making her first start.

“I like him (Justify) hugely. Just Glamourous would have run and won last Saturday but couldn’t because she was first emergency and didn’t get a start. I’ve got a lot of time for Justify,” she added.

Another member of Justify’s second Australian crop was also highly sought after when the same connections went to A$460,000 to take that one home from the Coolmore Stud consignment. 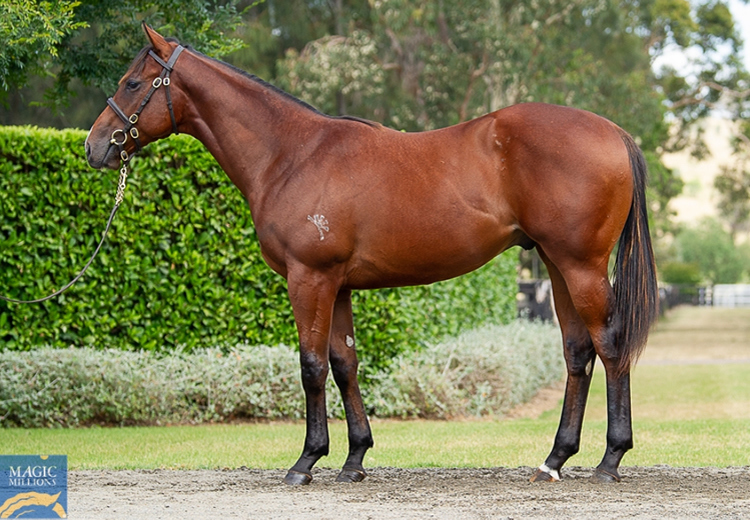 He is the first foal out of the winning Fastnet Rock mare Pelican, a daughter of two-time New Zealand Horse of the Year Seachange. The family also includes Seachange’s Group I winning half-sister Keepa Cruisin.