Following closely on the heels of his first winner over the weekend, European Champion 2-Year-Old Colt Air Force Blue will be prominently represented at this week’s OBS Spring Sale of Two-Year-Olds in Training. Looking to continue his successful start to the 2-year-old sales season, the stallion is is set to have 12 2-year-olds set go through the ring from June 9 – 12.

The group is led through the ring by Hip 100, a half-brother to three winners consigned by Woodside Ranch.

Breezing in :10.1 during the breeze show, the Hinkle-bred colt out of Tiznow’s Make Haste is a grandson of Grade II winner Buy The Barrel, who is also the dam of War Front’s Group III-placed Mise En Rose and Listed placed Stave. The War Front x Tiznow cross has proved to be successful from its two runners with Grade I winner American Patriot and Grade III winner/Grade I-placed Lull both out of Tiznow mares by Air Force Blue’s sire.

Air Force Blue’s only other offering on Tuesday is Wavertree Stable’s Hip 209, a half-brother to stakes-placed Lucky Jingle.

The colt stopped the clock in :20.4 at last week’s breeze show to sit just a few ticks off the bullet time for the quarter. Out of the winning mare No Splits, his dam has produced two winners from two to race and is a daughter of Grade II winner Great Intentions. Bred by Royal Oak Farm, LLC, the colt also hails from the family of Grade I winner Karlovy Vary, who is the dam of Scat Daddy’s Grade III winner Mean Mary. 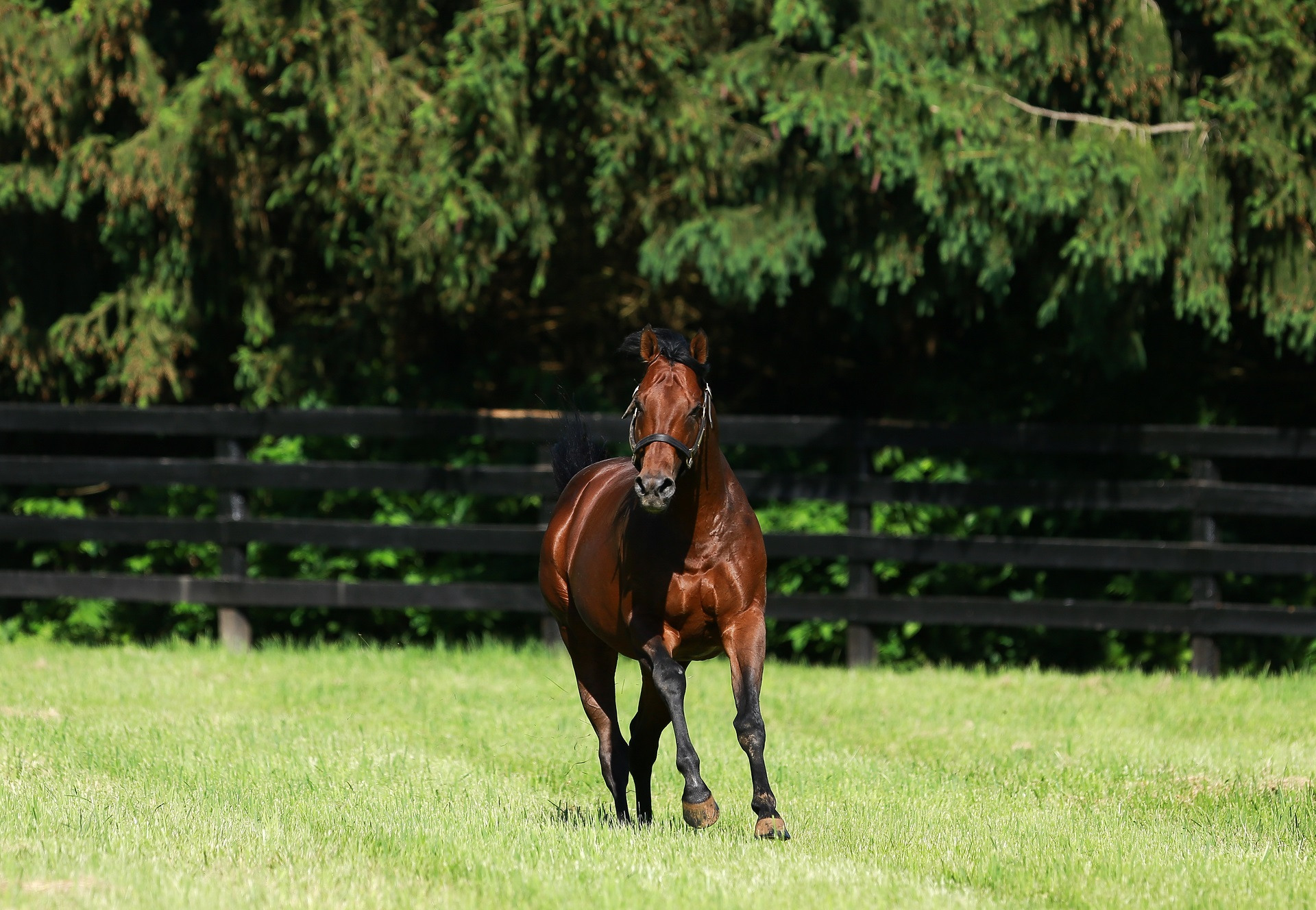 Out of Wild Poppy, a winning daughter of Champion Flanders and half-sister to Champion Surfside, she is a half-sister to two winners and is inbred to top mare Starlet Storm – who is also Air Force Blue’s third dam. A filly with 14 stakes horses on her page, the filly is bred on the War Front x El Prado cross that has produced six winners from six to run, including Grade II winner Summer Front. The Pursuit Of Success LLC-bred is also bred on a similar cross to Champion U S Navy Flag and Group I winners Roly Poly and Fog Of War, with all three out of Sadler’s Wells granddaughters.

Breezing in :10.3 last week, Hip 684 from de Meric Sales is bred on that same Sadler’s Wells cross as Hip 667, this filly out of the winning Montjeu mare Wooden Heart. The second foal out of a half-sister to Australia's stakes-placed La Australiana from the family of Group II winning Mubtaker, the Glenvale Stud-bred’s dam returned to Air Force Blue last year.

A half-brother to stakes-placed Reversethedecision, Air Force Blue’s Hip 720 out of Alpha Centauri and consigned by Potero Stables has stakes horses under each of his first seven dams.

Bred by Overbrook Farm, the colt’s fifth dam is Grade I-winning bluehen broodmare Chris Evert. Class runs through the family with his own dam a half-sister to Group II-placed Bodes Galaxy and out of a half-sister to Group I winner Etoile Montane, the dam of Grade II winner Starformer and granddam of Listed winning Flavius. Alpha Centauri visited American Pharoah last year.

The busiest day of the sale for Europe’s Champion 2-Year-Old, Air Force Blue’s Hip 756 consigned by Golden Thoroughbred Training And Sales also goes through the ring on Thursday after breezing in :10.2.

Out of Tapit’s Azha, the Alexander-Groves Thoroughbreds-bred is a half-sister to stakes-placed King Dilly and is a great-granddaughter of Champion 2-Year-Old Filly and bluehen Althea. Azha is out of Althea’s Listed winning daughter Alyssum and has already shown her producing prowess with King Dilly her first foal to race. 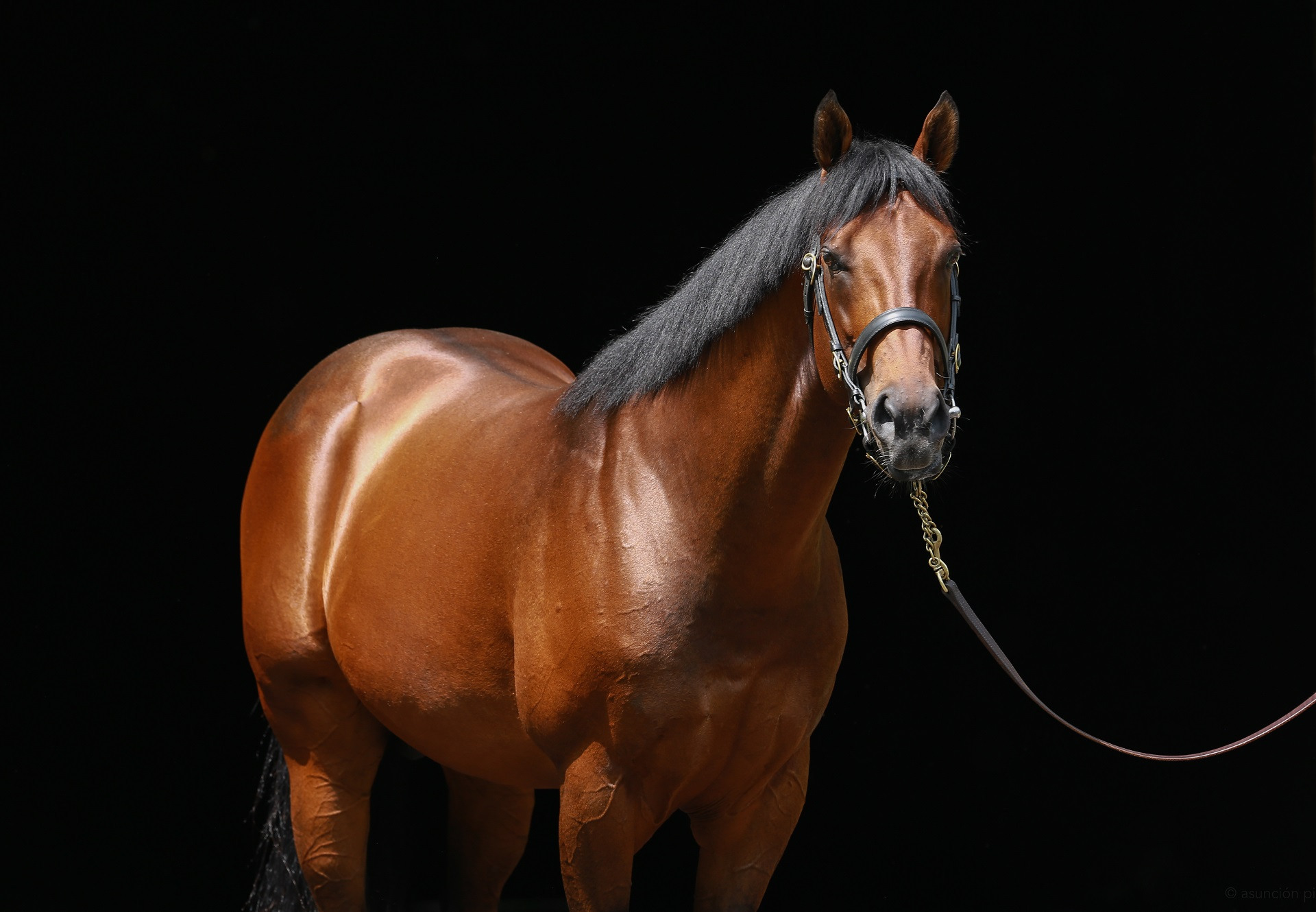 Air Force Pink is next through the ring as Hip 792. The first foal out of Munnings’ winning Bid n Ask, she is a granddaughter of Listed placed Devine, who is a full sister to Grade I winner Lakeway. Air Force Pink’s dam is a half-sister to Grade III winner Scotus and the dam of Canadian champion Grand Adventure. The family also includes Lakeway’s Grade I-winning daughter Sluice and Grade I Kentucky Oaks third Flying Spur.

Late in the day on Thursday, Scanlon Training and Sales sends out Hip 822 out of Listed-placed Cabbage Key, who has produced four winners. Also a half-sister to three other stakes horses, Cabbage Key is a granddaughter of Group I-placed Gallanta, the dam of European Champion 2-Year-Old Filly Gay Gallanta.

Breezing a quarter in :21.1, the colt out of an A.P. Indy mare is bred on the same cross as Grade II winner On Leave and Grade III winner Journey Home among five stakes winners.

Set to sell at the Fasig-Tipton Gulfstream Sale before its cancellation in March, Listed winning Conquest Strate Up's filly is entered in the supplemental catalog here as Lot 1288 on Thursday. Bred by Pippa’s Hurricane LLC and offered by Hidden Brook, the filly from the family of successful sire Curlin was a standout pick for Mark Roberts earlier this year.

“I like all three of the Air Force Blues we have, in particular the filly out of Conquest Strate Up, she is very nice,” he said. “They are all athletic, good training horses who get over the ground very well.”

The final day of selling has two Air Force Blue fillies strutting their stuff in the OBS pavilion, led by Lot 1129.

Bred by Leading Edge Farm in Florida, the filly is a great-granddaughter of Grade I winner and producer Clear Mandate. One of two Air Force Blues offered by Potero Stables, she is bred on the same successful Tiznow cross as Hip 100. Tiznow is also the sire of Clear Mandate’s Grade I winner Strong Mandate, one of three stakes winners for the mare.

The final Air Force Blue to go through the ring is the Randy Bradshaw-consigned filly out of Listed-placed Excelente as Hip 1301. A half-sister to four winners and from the family of Group I winner Fraulein, the Summerhill Stud-bred filly was given high marks by Bradshaw in her early training.

“She is a pretty filly who has shown a lot of quality in her training and acts like she could be special,” he said of his $140,000 Keeneland September purchase.

The highest rated 2-year-old Aidan O’Brien has ever trained, European Champion 2-Year-Old Air Force Blue’s first 2-year-olds have already impressed in the ring, selling for up to $390,000 earlier this year.